Lets get one thing straight before I go ahead with this rant: I HATE Irish water. I hate everything about the formation of Irish water, from the excessive waste of public funding to the media manipulation during the early phases, to the ongoing arrests of citizens across the country, to the metering program, media campaigns, privatization concerns, conservation bribe, obvious political policing, the list goes on and on and on. I know this is my opinion, and I full well expect a lot of hate, so the flame shield is on for this one. 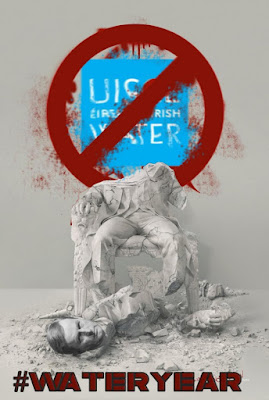 I don't like the quango, it must be said. I could write a fair few articles based on my hatred of them, so maybe that's something worth considering in future. However, this opinion piece is based on the other side, on the opposition's ways of showing their opposition to the hated utility. In particular, let's delve into the events and reaction to the anti-austerity protest yesterday that led to occupying bank of Ireland at College Green.

The event itself started at the Garden of Remembrance, before marching through the streets, to the GPO, College Green, Brown Thomas, the entrance to Stephens Green shopping center, and then breaking up at the end near the GPO. Along the way the Bank of Ireland was taken over before gardai removed the protesters.

This event has hit a strange nerve for me, but it must be said; The more I think about this protest, the less I like it.

Some may say that this was just another protest by die hard protesters, but reaction, both on social media and from mainstream media has been largely negative. Notably, this is the first time I have seen that former protesters condemned the act, and joining with the side of those that are paying the bills. 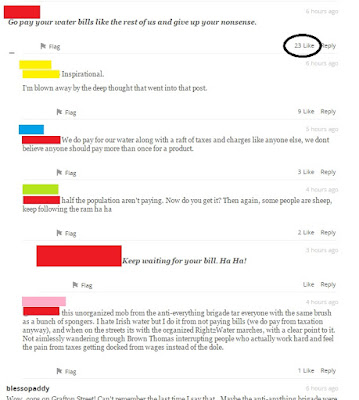 So, it can be said that this protest was a failure. But why? Well, I can put it down to a number of reasons;

1. No political or trade backing
Previous large scale protests were set up by left wing and independent opposition to the Fine Gael/Labour coalition, as well as the Right2Water movement. The organizing was stronger, and with better planning skills. large turnouts to convey a strong message and an alternative to what we currently have.
This march was organised by a single man, and while that is impressive that he managed to get a crowd or around 200 people, its still nowhere near the turnout to be expected at an official march. The organizing was done via social media, similar to earlier efforts, but without the larger groups getting posters, banners, talking about it on TV/radio and generally promoting it strongly, this was about as strong as it got. An admirable effort from one man trying to get a group together, but it needed more to convince Joe Soap to join in.
I understand that a fair few protesters hate the idea of a political party using their march against austerity to further their agenda, but change only happens at election with candidates and at the Dail. Few, if any of these protesters look likely to run for election, despite the fire to change the world.

2. The group was directionless
Okay, so while there was no stronger backing, this could still have been an effective protest if it was just a few hundred people and a drive to make a point. However, this is another reason why the group just didn't work; no major point was being made.

A lot of the negative reaction has come from the group not making a clear point, and I can see that. What has marching through Brown Thomas got to do with Irish Water? Or hell, even Austerity? randomly wandering there just to make noise in front of the very people you should be convincing to join your cause is a bad move. The reason the larger protests worked so well is that they had a clear point; No to Irish Water and not to put up with the bull**** that the incumbent parties were feeding about it.

3. It reinforces the stereotype
Lets not kid ourselves; Supporters of water charges LOVE to brand everyone who doesn't pay as a bunch of dole spongers that waste garda resources and wreck hard workers days by blocking the city center streets so they can't get home.
I hate this stereotype, and especially since the larger marches broke that stereotype, showing such a wide spectrum of Irish society out marching against a common issue. Never have so many been so strongly opposed to an issue and shown it on the streets, as it is during this Irish Water Crisis. 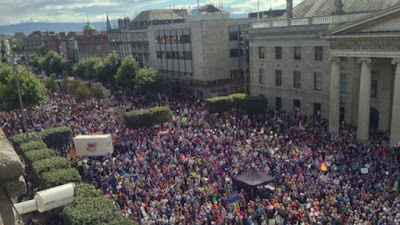 So to revert back to a very specific set of hardcore full time protesters marching against a range of issues relevant to austerity can't help but feel like a step backwards. Where were the upper-middle class that dislike the company on principle? Where were those that brought entire families to show that future generations would be affected? On top of that, hearing the words Occupy immediately rang alarm bells, and I saw what this protest ultimately was; A feeble remake of the Occupy movement. 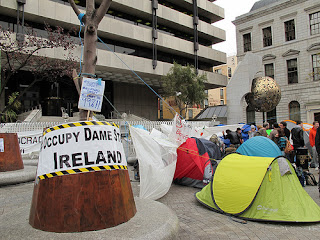 These protesters marched and reminded the public of those that camped outside the banks for weeks on end without showing any alternate solution. They were laughing stocks in the eyes of the public, and now its biting those that genuinely supported them in the arse.

This comment sums it up well; "Thousands of bleak weary sheep out there saw us" from one of the protesters. The earlier ones worked because those very hard working 'sheep' joined their cause. these sheep are the reason for the earlier marches success, and to turn their back to the everyman only results in a very small minority.

4. It interrupted the public (In a bad way)
the initial protest did not really have that much of a garda presence, at least in comparison to last year's complete barricade of the Dail and Kildare Street. Then of course, the occupation of Bank of Ireland happened, and of course scores of them were sent out. 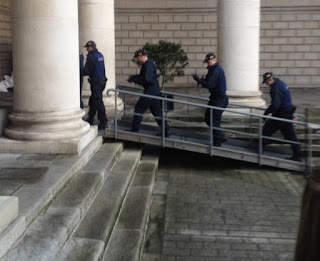 What point was there to take over the bank? To show that banks got bailed out? We have known that since 2007. On top of that, you have employees just trying to get a days work over with, taking the place over is not going to help their day at all.

Brown Thomas was less affected, but you could see some staff giving a large facepalm as the protesters made their way through the stores. Why are these angry people coming through here? what is their reason? Do they think we are in any way part of the Denis O Brien style of corporate greed? It just raises a lot of confusion. A protester did comment that it was great craic though, so maybe that was the reason.

And what was the point heading to Stephens Green shopping centre? No targets like the Dail or GPO are near there. Oh right, apparently its the companies that are not really paying tax that is the downfall of the country. 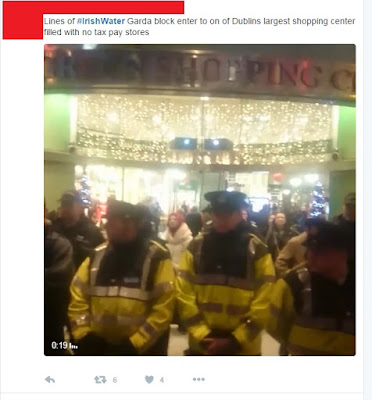 Joe Soap couldn't care less about that sort of thing. Irish water is the prime target, so what was with such flimsy justification to get the Gardai to block the entrance for Christmas shoppers?

Now of course its their right to do such a march, and they genuinely have a lot to be angry about, but does this march have any other point beyond "Austerity is awful and we hate it"? Is it because there has not been a mass protest since August and they miss the idea of locking down the city in support? I would have personally waited until before the election for another march.

Getting to a vague point, I guess I hated yesterday's protest because it gave pro-water supporters ammunition to throw at the opposition that everyone is a clueless waster that protests, or that the turnout was so low so that means the hatred is dwindling. that is not the case for a large proportion of the country (or even from a few in the group that marched). We have legitimate reason to hate the superquango and all it represents. however, yesterday gave us a demo of how not to voice your opinions. Bin the bills, join the organized protests, and boot out FG and Labour at the polling station. Protesting for the sake of protesting, even if its important? No hope there ladies and gentlemen.

Keep calm, and Boycott Irish Water.
Posted by Burns at 08:39 No comments: