An outsider looking in: Call of Duty: Ghosts trailer opinions

Its a tense time that the Syrian intervention crisis is still ongoing, that some may think it is inevitable before the U.S intervene and that peace in the region will be even less likely than before, and with Russia defending the country for its own reasons. Its all a mess, and I wish I knew more about it to debate the issue stronger but it does reveal just how strong an influence the United States has on international conflicts. Not many nations like the idea of the superpower getting into other countries affairs, particularly when it has the power to strike targets at the drop of the presidents hat.

It is not particularly easy to root for the states in the last few decades when it comes to conflict. They are the big guy, the ones that can conquer the opposition forces, and while they are the good guys, they have not really appeared as such in any war post WW2, when the enemy posed a threat and was genuinely corrupted.

If you are wondering why I started a game trailer analysis with such a delve into politics, just check out the latest trailer for Infinity Ward's latest shooter and ask yourself the question: Just HOW badly do America want another worthwhile war?

Its rather unsettling, given current events depicting america as a collosal power turning the tide of any conflict, that Call of Duty Ghosts depicts the country as a fragile state that can be invaded by any nation after their own tech strikes them and they have to fight to survive.

Before I go any further, this is opinions on how the story is depicted in the trailer. This could turn out to have a very different tone with different views and sequences in the final game, so a full review will have to be done of the game when it comes out.

The trailer begins with a space segment, where enemies attack astronauts & american forces fight back, but not before their orbital weapon fires at the states. Its not clear why weapons are used in space at all, but hey, near future right?!
initially I didn't get how an enemy force could get away with sending guns into space, but then a brief flash indicates something curious 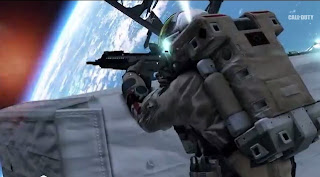 WE DONT WANT TO ATTACK YOU MURICA!

The flag on the enemy astronaut is of the E.U
after this point the narrator talks about betrayal of trust, so its fair to assume that Europeans activated the U.S weapon. Coming from a European, its rather absurd. Why would Europe want to attack the U.S? I am hoping the game provides justification.

After that we get a sequence of military machinery and the narrator saying how those 'south of the equator' overwhelmed the poor crippled nation, and were free to invade america after the weapon attack 10 years prior.

Again, its hard to escape the implausibility of what is happening, yet its delivered in a deadpan manner, with no humour. The narrator does not say 'jesus, we didn't see this coming' or anything like that. No, this is a serious threat at the time this game takes place. 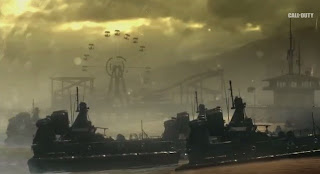 Screw Russia or China, the South will be the ones to attack!

A series of scripted events happen with the protagonist. Admittedly very flashy, particularly with the train sequence. 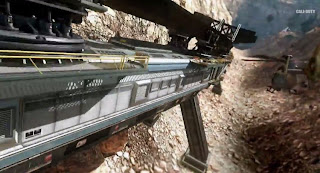 And of course the running gag of the games marketing, the Call of Duty Dog gets an appearance, taking down a helicopter all by himself 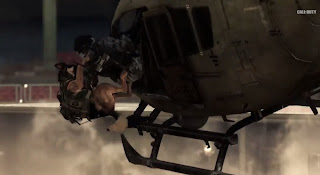 Such a cutesy killing machine! have a biccy!

And then we get to the point where the patriotism meter busts up, with the line "A man who truly loves his country doesn't just give up his life. He gives his son's"

Now I love my country, despite its problems with terrible politicians, money woes & a failing public transport system, but I wouldn't send my son out on the frontlines just to please it. Its scary that the game has a line encouraging future generations to fight when such a thing seems certain to happen right now and noone wants it. I believe a more appropriate line would have been " ...doesn't just give up his life, he protects his son's". Family comes ahead of national jingoism to me.

And then more scripted sequences before the obligatory pre order request comes in at the end.

My ethics takeaway from the trailer is that America really, REALLY wants to justify its power by facing an enemy of sufficient threat, no matter the cost to its own. When the threat is from being bombed by its own supersatellites, and invaded by the south american/african/australian continents it really leaves a bad taste. What would those invaders get out of invading the country? Mere land and constant rebellions are not worth it. If an absurd bombing was to happen, the E.U would not be the ones attacking the U.S, contrary, they would be the first to give a helping hand in delivering aid. 10 years of cities decaying assumes uninhabitable areas, so the conquerors get stuck with areas they cannot really occupy.
Worstly the tone is sickeningly patriotic towards the states; there is the Blops 2 way of showing that while what the states do is good, they left some in a bad way, and then there is the ghosts way, of sacrificing your family to the stars & stripes because other countries have nothing better to do than plan invading the superpower when its down.

From a gameplay standpoint I cannot help but feel like this is a retread of Black ops 2 minus the view of the other side. Think about it, an american weapons system is turned against them and those south of the states are responsible & filled with scripted set pieces? The tone is different from Blops 2's action extravaganza but the events are similar.

And believe it or not, I am a big fan of how the series treated its positivity towards the west not too long ago. CoD4 showed protagonists that were brutal & morally questionnable, yet got results, and showed that noone in that game was truly evil or angelic. MW3 conversely showed that while attacking america, the Russians may as well have chemical attacks in Europe & massacre prague civilians...just because its necessary! 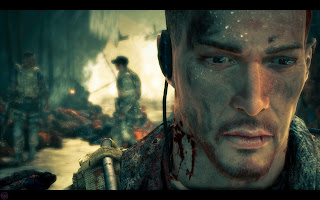 Spec Ops the line may have spoiled me on story choice, but after playing the line just about every modern shooter since has been going against the themes of what the line did, often to their detriment in my eyes.
So after all this ranting, remember that a little bit of murica! is good and all, but don't try so hard to make them underdogs, or have them depicted as such in just about every modern shooter ever made.

One sided opinion & flame shield on
Posted by Burns at 05:05 No comments: